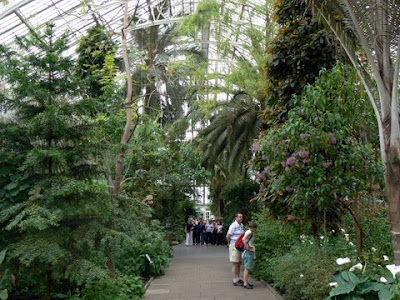 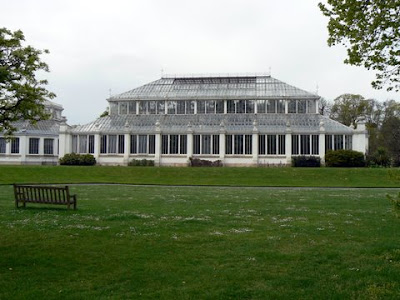 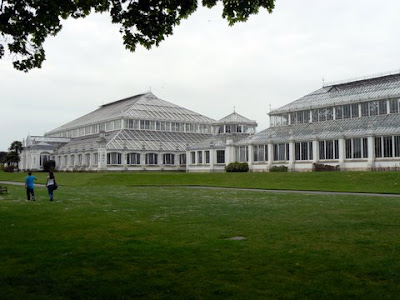 Kew director Sir William Hooker commissioned Decimus Burton to begin work on the glasshouse in 1859. With voracious Victorian collectors bringing back ever more species from around the globe, Kew needed somewhere to house its growing collection of semi-hardy and temperate plants. The Temperate House was officially opened, unfinished, in 1863. Because costs had soared during construction, it was not completed for another four decades.
Today, Kew’s Temperate House is arranged according to Decimus Burton’s original plan. The South Wing and Octagon are home to African plants, the main rectangular hall hosts sub-tropical trees and palms, while the North Wing and Octagon contain temperate plants from Australia, New Zealand, Asia and the Pacific. A boiler in the nearby Stable Yard helps keep the temperature to a minimum 10°C all year round. The sun provides a little extra warmth for the heat-loving South African plants at the southern end of the glasshouse.

Things to look out for
Many of the plants growing in the Temperate House are useful to us. There is a collection of fruit-yielding citrus plants that includes lemon and lime, a tea bush (Camellia sinensis) from which the nation’s favourite brew is made and a specimen of Cinchona which is used as a treatment for malaria. The traditional African Hut located at the southern end of Temperate House shows how indigenous people put local plants to use as building materials.
The sheer size of the Temperate House has made it the final resting place for many plants that have outgrown other parts of the Gardens at Kew. The largest of these is the Chilean Wine Palm, Jubaea chilensis. When it was last measured in 1985, it was 17.6 metres (58 feet) high and is still slowly growing today. It was raised, two decades before the Temperate House was built, from a seed brought to Kew from Chile. The wine palm’s seeds are edible, its sap is used as a sweetener and its leaves make an excellent roofing thatch.

Plants on the verge of extinction
Some plants on display are endangered island species being propagated for reintroduction to their native lands. Among these is the St Helena ebony tree (Trochetiopsis ebenus). By 1980 only two specimens were left in the wild, clinging to a steep rock face on the island. Cuttings from these came to Kew for propagation. Several thousand plants have since been reintroduced at six sites on the island. Kew scientists are now helping islanders develop protocols for propagating other rare plants. You can find out how Kew save plants under threat at the Millennium Seed Bank.
Conservation and restoration
When Decimus Burton designed the Temperate House he chose the best materials available to him at the time. Nonetheless, by the early 1970s the glasshouse was in a sorry state. It had suffered structural damage during the last war. A survey of the structure in 1972 revealed corroding wrought iron and disintegrating masonry. Workmen spent three and a half years renovating the glasshouse. Because the building is Grade I listed, they had to retain its architectural integrity. Modern aluminium glazing bars replaced timber sashes, a teak annex added in 1952 was dismantled and a new boiler house in the nearby Stable Yard replaced the original one installed beneath the glasshouse.
Nota: Mais um belíssimo exemplo de uma "Estufa de Exibição", neste caso concreto para plantas de Clima Temperado. O nosso Jardim Botânico precisa de estufas de exibição para cumprir em plenitude a sua missão.
Publicada por Amigos do Jardim Botânico à(s) 12:28