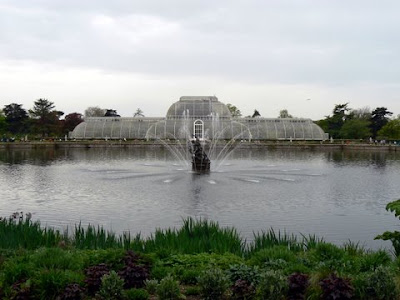 Experts consider Kew’s Palm House as the most important surviving Victorian iron and glass structure in the world. It was designed to accommodate the exotic palms being collected and introduced to Europe in early Victorian times. The project was pioneering, as it was the first time engineers had used wrought iron to span such large widths without supporting columns. This technique was borrowed from the shipbuilding industry; from a distance the glasshouse resembles an upturned hull. The result was a vast, light, lofty space that could easily accommodate the crowns of large palms.
Heating was an important element of the glasshouse’s design, as tropical palms need a warm, moist environment to thrive. Originally, basement boilers sent heat into the glasshouse via water pipes running beneath iron gratings in the floor. A tunnel ran between the Palm House and the Italianate Campanile smoke stack that stands beside Victoria Gate. This 150-metres-long (490 ft) passage served the dual purpose of carrying away sooty fumes to be released from the chimney and enabling coal to be brought to the boilers by underground railway. Today, the glasshouse is heated using gas and the tunnel houses Palm House Keeper Wesley Shaw’s office.
Originally, palms, cycads and climbers were planted in large teak tubs or clay pots that sat atop benches above the iron gratings. However, in 1860, two large central beds were dug and the tallest palms planted in them. Subsequently, most of the glasshouse’s plants were dug into beds to form a miniature indoor tropical rainforest. Today, the tallest palms that need the most room are located beneath the central dome. These include the peach palm (Bactris gasipaes), babassu (Attalea speciosa), queen palm (Syagrus romanzoffiana) and the coconut palm (Cocos nucifera).
Conservation and restoration
The Palm House was first restored between 1955 and 1957 when its glazing bars were cleaned and the entire house re-glazed. At this time the boilers were converted to oil and moved close to the Italianate Campanile. Between 1984 and 1988 a more comprehensive overhaul was undertaken. The Palm House was emptied for the first time in its history, with most plants moved to other glasshouses. Those that were too large were cut down and used to make specimens for the Herbarium and Museum. Under direction of the Property Services Agency, the Grade I Listed building was completely dismantled, restored and rebuilt. Ten miles of replica glazing bars made of stainless steel were put in place to hold new panes of toughened safety glass. The restoration took as long to finish as the glasshouse took to build.
Things to look out for
Highlights in the South Wing, which contains plants from Africa and the Indian Ocean Islands, include the African oil palm (Elaeis guineensis) the most important oil-producing plantation palm in the Tropics and the rare triangle palm (Dypsis decaryi) from Madagascar.
The main central section houses plants from the Americas, including many economically important species. You’ll find cocoa, rubber, banana and papaya plants growing here alongside the Mexican yam (Dioscorea macrostachya) which was used to develop the contraceptive pill. The North Wing showcases plants from Asia, Australasia and the Pacific, the region that contains the world’s greatest diversity of palms. Here you’ll find climbing palms called rattans from which cane furniture is made. Also, there are several Asian fruit trees including mango, starfruit, breadfruit and jackfruit.
Marine Display
Housed, in the basement of the Palm House, the display recreates four major marine habitats, emphasising the importance of marine plants.
in http://www.kew.org/
Nota: O Jardim Botânico de Kew em Londres, líder na sua área e classificado pela UNESCO como Património Mundial da Humanidade tem quatro estufas de exibição sendo a Palm House a mais antiga.
Publicada por Amigos do Jardim Botânico à(s) 12:08