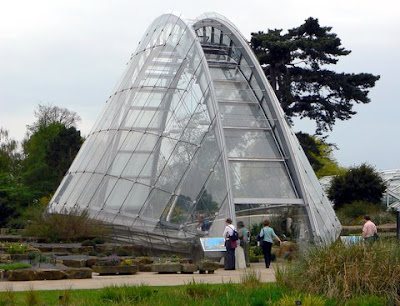 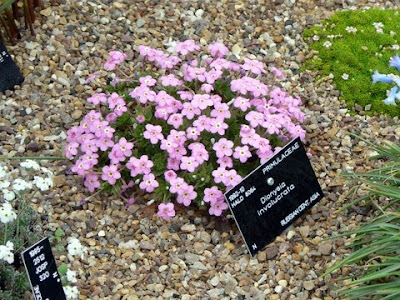 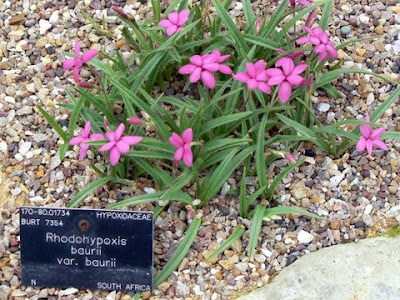 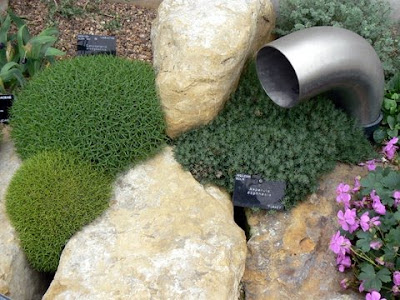 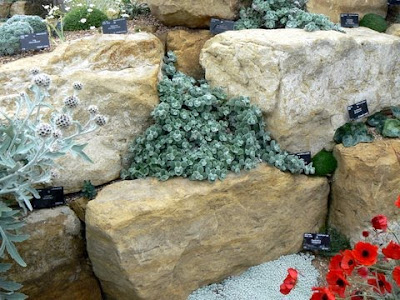 The Davies Alpine House is the latest addition to Kew’s glasshouses. It opened in 2006, the first new glasshouse to be commissioned for two decades. It is located at the north end of the Rock Garden.

Historical information
There has been an Alpine House at Kew since 1887. The first house was built to a traditional design with brick foundations, wooden sides and a low-pitched glass roof. Potted plants stood on wooden platforms either side of a central path. This house was demolished and rebuilt to a longer wider design in 1939. A third Alpine House replaced it in 1981. With glass sides and roof, this was constructed using the state-of-the-art technology of the time. Its built-in systems were designed to control temperature, ventilation and moisture levels, while its pyramid shape reflected the mountain landscapes from which its inhabitants came.

Meeting the needs of alpine plants
In the wild, alpines spend the winter dormant. They remain dry and protected from extreme temperatures and the desiccating effect of cold winds by a blanket of snow. Spring arrives rapidly, with melting snow providing moisture for growth and exposing the plants to intense light. The short growing season means plants have to flower and set seed quickly. The Davies Alpine House was designed to create the cool, dry and windy conditions that alpine plants favour, without using energy-intensive air-conditioning and wind pumps. Its architects employed traditional practices and the latest technology to achieve this.
Although the glasshouse is only 16 metres long, its roof reaches ten metres high. This creates a stack effect that draws in cool air through permanent openings on either side and releases warm air through vents in the roof. Meanwhile, a fan blows air through a concrete labyrinth beneath the ground. The air cools on its convoluted journey and is released into the glasshouse through steel pipes. The panes of glass are 12mm thick and have a low iron content which allows over 90 per cent of light through. Meanwhile, fan-like shades on the east and west sides of the glasshouse protect plants from the most intense heat of the summer sun.

Behind the scenes
Kew’s Alpine House team has built up a large collection of plants over time. Ranging from cushion plants from high-mountain environments to colourful bulbs from the Mediterranean, these are nurtured in the Alpine Nursery by four permanent staff and a trainee. Only when plants come into bloom and are looking their best do they go on display in the Alpine House. All the plants are grown in pots, enabling staff to provide the soil and watering regime that best suits each species.
During hot summers in the old Alpine House the temperatures often exceeded 40°C. However, in the new glasshouse the temperatures generally remain below 32°C. According to Alpine House Keeper Richard Wilford, the plants used to look straggly from the reduced light after a two-week stint on display in the old Alpine House. Now, they thrive in the more favourable conditions and return to the Alpine Nursery looking as healthy as when they left.

Things to look out for
Throughout the year, the Davies Alpine House displays a wide range of campanulas, dianthus, small ferns, helichrysum, small lavenders, primulas, saxifrage, thymes, tulips and verbascums along with lesser-known species. One of the glasshouse’s rarest occupants is the Chilean Blue Crocus, Tecophilaea cyanocrocus. It has scented cobalt blue flowers with a white centre. Described in 1862, it was only known to grow in the range of hills surrounding Santiago, at about 3,000m. The plant was regarded as extinct in the wild from the 1950s onwards – due to unsustainable collecting by bulb dealers, overgrazing by cattle and localised habitat change – but was rediscovered in 2001 on private land south of Santiago.
Nota: inaugurada em 2006, esta belíssima estrutura é a última estufa de exibição construída em Kew. São estruturas desta qualidade e utilidade que a LAJB imagina no futuro para o nosso Jardim Botânico. Não aceitamos que se vá destruir a actual estufa do Jardim Botânico (obsoleta e degradada) para no lugar dela nascer uma "Galeria comercial". Afinal qual é a missão de um Jardim Botânico no séc. XXI?
Publicada por Amigos do Jardim Botânico à(s) 18:08