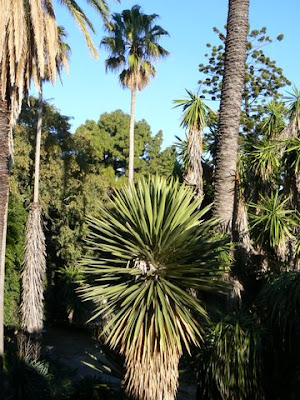 Lisbon's Botanical Garden has been selected for inclusion in the World Monuments Watch list of 2012. The list was made public in New York on the 5th of October.

The World Monuments Fund (www.wmf.org) is the world's foremost private, non-profit organization dedicated to preserving important cultural-heritage sites around the world. Every two years since 1996, the World Monuments Watch has focused global attention on cultural heritage sites around the world that are endangered. Inclusion on the list helps to raise the funds needed for their rescue and often spurs local governments and communities to take an active role in protecting their cultural icons. The sites are selected from submitted applications by an international panel of leading experts in the field, including representatives from UNESCO and ICOMOS.

The Jardim Botânico da Universidade de Lisboa was established in 1873 and inaugurated in 1878. The Garden, which lies within the city centre, was set up to support teaching and research at the Faculty of Sciences of the university. Within the 4.2-hectare Garden are significant collections of mainly palms, ficus and cycas, as well as many endangered plant species. Furthermore, the luxuriant sub-tropical vegetation of the Garden plays an important role as a climate and pollution regulator for the city, and provides refuge for migratory fauna.

The Garden, the largest 19th-century Romantic garden in Lisbon, exhibits a great diversity of plants gathered from every part of the world. It is a living biodiversity bank of wild species. The Garden is a Grade 1-listed monument (Monumento Nacional).
The future of the Garden is now threatened by a proposed mixed-use development of surrounding and adjacent land parcels, which would have a severely negative impact on the Garden; the development will result in over 25,000 square meters of new built-up area in the garden’s buffer zone. The project was conceived by the City Council of Lisbon (a competition for the project was won by the architectural practice Aires Mateus) to enhance the Gardens’ neighbourhood. Other threats to the Garden include inadequate funding and staff, and the dilapidation of the Garden’s living collections and built heritage. In addition, the development of projects to engage Lisbon and Portuguese citizens with the mission of the Botanic Garden, and the campaigning for appropriate legal protection and respect of the integrity of the Garden’s heritage value need to be addressed urgently.
Friends of the Botanics is a non-governmental, non-profit organization established in 1986 for the safeguard, support and endowment of Lisbon’s Botanical Garden. The application for the Garden was submitted in March 2011 by Friends of the Botanics, supported by renowned Portuguese landscape architect, Dr. Prof. Ribeiro Telles.

With the help of WMF and a platform of 14 NGOs*, Friends of the Botanics will work towards reversing the threats facing Lisbon’s Botanical Garden. The group will call for the review of the current design of the urban Master Plan (Plano de Pormenor), and the implementation of projects that would respect the long-term needs of the Garden and which would help safeguard the Garden as a place of education, research and recreation for present and future generations.

For further information, contact the representatives of Friends of the Botanics: