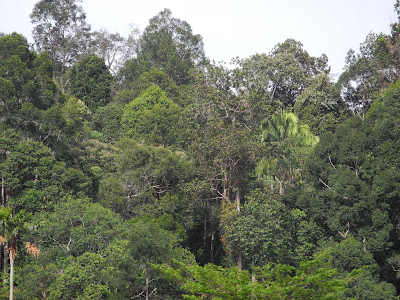 Malaysia is cutting down forests at more than triple the average rate of the rest of Asia, with the destruction concentrated in the highly biodiverse peatland forests on the island of Borneo, a new analysis of satellite data reveals.

Roughly 10 percent of forests in the Malaysian state of Sarawak on Borneo were cleared in just the past five years, according to the analysis, which was commissioned by Wetlands International, a Netherlands-based environmental group. By comparison, the deforestation rate for the rest of Asia over the last five years was roughly 3.5 percent.
Sarawak’s coastal peatland forests are disappearing at an even faster rate, with an estimated 33 percent cut down since 2005, the group found. Once cleared, the land is being rapidly converted into palm oil plantations.
“As the timber resource has been depleted, the timber companies are now engaging in the oil palm business, completing the annihilation of Sarawak’s peat swamp forests,” Marcel Silvius, senior program manager with Wetlands International, said in a statement.
Several threatened and endangered species, including the Sumatran rhino, the Bornean clouded leopard and the Borneo pygmy elephant, are found in Sarawak’s peatland forests.
The group said that Malaysia had failed to provide detailed information on land use and deforestation in Sarawak, but that satellite data provided clear proof that deforestation was occurring at a rapid rate.
“Free availability of satellite imagery and tools such as Google Earth are revolutionizing forest monitoring,” said Neils Wielaard, a senior project manager with SarVision, a Netherlands remote sensing firm that conducted the satellite data analysis.
In a statement accompanying the report, Wetlands International called for a ban on palm oil production on Borneo’s remaining peatlands and an end to biofuel incentives in the European Union that it said contributed to the land changes in Malaysia. in New York Times, 1 de Fevereiro de 2011
Foto: Floresta no Estado de Johor, no sul da Malásia.
Publicada por Amigos do Jardim Botânico à(s) 23:59