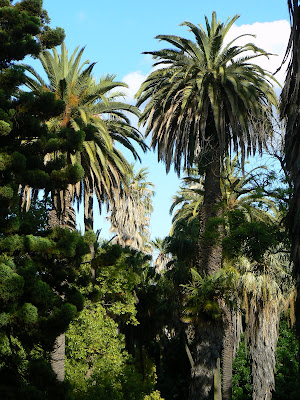 Going further on, and straight on, we see on the right the building of the Escola Polytechnica, where the Faculty of Sciences is now installed. This building was erected in 1884 on the ground belonging to the Novitiate of the Society of Jesus. In some buildings adjoining the Escola the Museu du Bocage (Zoological Museum) is installed. This museum is worth visiting, for it contains some curious specimens. In the Sala Portugal there are some remarkable fishes; there is a strange one, 8,40 metres long and 3,60 metres round which was caught at Paço d'Arcos by King Carlos. Ther is also an enormous tortoise caught in the Peniche coast. After the Sala Portugal, there is the Sala de África Portugueza (Portuguese Africa Room) with a very important and varied collection; the Mammals Room, with a very fair amount of specimens from all over the world; the Birds Room, the Invertebrates Room, the Skeletons Room, and such like. The number of specimens, covering mammals, birds, reptiles, fishes, etc., is over 20,000, and there are more than 50,000 insects. The shell collection, which is enormous, must also not be forgotten.
As the installation is undergoing, in so far as the building is concerned, extensive repairs, there is no definite day for visitors; but, if the due authority is requested, the palce can be visited every day between 12:30 and 6:30 p.m.

This Museum is installed in the first floor of the building; on the ground floor are the botanical Museum, and the Museum of Geology and Mineralogy. The latter is especially remarkable, one of its most interesting exhibits being a large mass of native copper, partly covered with cuprite, weighing 1224 kilos; this comes from Mamocabo stream, near the town of Cachoeira, 120 kilometres from Bahia (Brazil), and was brought to Portugal as far back as 1792.

This building has adjoining it a garden which is one of the most picturesque in Lisbon, and even in Europe; so, at least, many foreigners have said. It contains specimens of the flora of all regions of the world. The garden is in a slope, and this is one of its great points, for the incline has been put to good use to every possible effect out of the varied vegetation that everywhere rises up, giving the aggregate an Edenic splendour. The garden contains several ponds, cascades, brooks, bridges, labyrinths, a fine hot-house, etc. in its upper part stands the Meteorological Observatory named after Infante Dom Luiz, and inaugurated in 1863, and also the Astronomical Observatory.

The tourist, should he so wish it, can go right through the garden and come out at the lower door, in Praça da Alegria, going on from there to the Avenida da Liberdade; but, as we are taking another route, we shall come out again at rua da escola Polytechnica, passing a frew yards onward by the Imprensa Nacional (National Printing Office).