Berlin's airport to be turned into a park 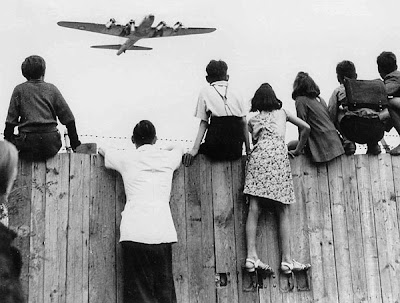 Tempelhof airport, which served as a lifeline for West Berlin during the Soviet blockade, will be turned into a park, ending years of wrangling over the future of the space.
Berlin's government will spend 61 million euros (£51 million) converting the airport, which was closed last month, into a garden in central Berlin which, at about one square mile, will be just under the size of New York's Central Park.
In 1948 and 1949, Cold War allies supplied West Berlin via an air lift that circumvented a Soviet land blockade. Tempelhof became a symbol of freedom for West Berlin, encircled by Communist East Germany.
Marko Rosteck, a spokesman for the Berlin government, said the monolithic limestone terminal, designed by Ernst Sagebiel, will be preserved. He said a wide variety of proposals for the terminal's use were being considered. "We're very fortunate to have a giant patch of green in the heart of the city just waiting to be developed," Mr Rosteck said, adding Berlin hopes to host an international garden exhibition in 2017 that it hopes will attract 3.5 million tourists. "It will make Berlin, which is already one of the greenest capitals in Europe, even greener," he added.
Over the years there were many proposals on what to do with the airport, which hosted some of the world's first commercial flights in 1923. The site was originally a military training ground. In 1909 American flight pioneer Orville Wright used it for aviation experiments.
The debate over Tempelhof's future was highly charged and continued up to the moment the loss-making airport, 3 miles south of the city centre, was shut down on Oct 31. Some of the suggestions for Tempelhof included turning it into a zoo, a sports park or a residential housing complex - or even a private hospital for affluent foreigners.
In Telegraph (Londres), 26 de Novembro de 2008
FOTO: Crianças em Berlim Ocidental observando aviões americanos durante o bloqueio Soviético de 1948-9. Dentro de alguns anos os aviões irão dar lugar ao voo de pássaros entre milhares de novas árvores... Temos o mesmo sonho para o velho aeroporto de Lisboa!
Publicada por Amigos do Jardim Botânico à(s) 22:28